by Ryan Hart | Updated on November 4, 2020 | Post may contain affiliate links. As an Amazon Associate we earn from qualifying purchases. 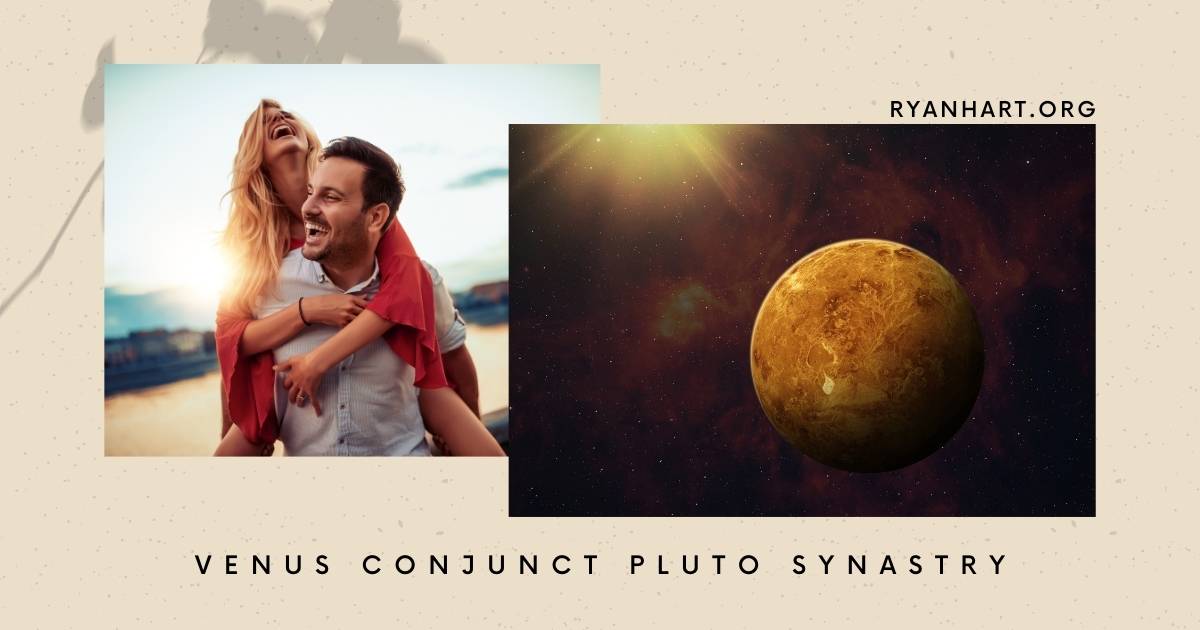 In this post I’m going to reveal what Venus conjunct Pluto synastry means for love and relationships.

In my research I discovered something very surprising about the zodiac sign compatibility of people with Venus Pluto synastry. I’m excited to share this with you.

Are you ready to learn more?

Venus conjunct Pluto synastry means that at the exact moment two people were born, Venus and Pluto were aligned in the same zodiac sign. This alignment usually indicates a strong physical attraction between two people.

In astrology, the word “conjunct” or “conjunction” means that two planets appear in the same place in the sky.

Let’s imagine that you and your partner are looking at an image of the heavens at the exact moment each of you were born. Venus conjunct Pluto means your Venus and their Pluto would appear to be in the same spot.

To determine if you have synastry or compatibility with another person you first need to look at your birth chart.

A birth chart describes where the sun, moon, and planets were located in relation to Earth at the exact moment someone was born.

According to astrology, understanding the alignment of the planets at the time of our birth can help us better understand ourselves and how the world perceives us.

If you want to discover your compatibility with another person, you can easily compare your birth chart with theirs. This is called a synastry chart.

Synastry is simply a comparison between the horoscopes of two or more people in order to determine how well they might get along.

What Does Venus Feel in Venus Pluto Synastry?

Venus is the planet of love, romance, and beauty. The position of Venus in your synastry report reveals interesting insights into your relationships, emotions, and happiness levels.

In Venus conjunct Pluto synastry, Venus is usually the person that experiences the strongest emotions in the relationship.

This does not mean that this is a one-way attraction or relationship. It just indicates that one person expresses their desires with more intensity or passion.

For instance, at the beginning of a relationship Venus may be the one who noticed the other person first. Or they had a secret crush on the other person, but never made a move.

At times, Venus might feel like Pluto is playing hard to get or simply ignoring them. For some reason, the distance between Venus and Pluto only seems to increase the desire, not weaken it.

Venus might express love for their partner in more public ways. They might even feel like telling the whole world. But when Pluto doesn’t return the gesture, Venus may get frustrated or feel defeated.

One thing to keep in mind about Venus Pluto Synastry is that Venus orbits very close to the Sun. This can make emotions intense and fiery. However, Pluto is very far from the Sun, making it cold and mysterious.

Venus Pluto conjunction couples may not express their emotions in the same way, which is what makes their relationship so interesting.

What Does Pluto Feel in Venus Pluto Synastry?

Pluto is symbolic of transformation and new beginnings. All good things must come to an end and something else must take its place. Pluto is the driving force behind changes happening in your relationship.

Astrologers believe that the location of Pluto in your birth chart could reveal hidden secrets, lies, or infidelity.

What this tells us is that Pluto might not feel the same emotions as Venus in Pluto Venus synastry.

Pluto is mysterious. Never revealing too much about who they are or what they hope to gain. They hold their cards very close to their chest.

Pluto is very careful about what they share with others, some might even call them secretive. Only their “inner circle” of friends know what’s going on in their life.

They are very good at reading others and quickly notice any advances made by Venus. Pluto rarely likes to make the first move because they don’t want to get hurt.

Pluto moves very slowly through the zodiac signs and does not change their mind often. Consistent and steady might be words that describe this person the best.

What does it feel like to have Venus Pluto synastry with someone else?

Are you feeling a strong or weak connection?

Either way, please leave a comment below right now.