10 Signs an Aries Man is in Love with You

by Ryan Hart | Updated on February 9, 2021 | Post may contain affiliate links. As an Amazon Associate we earn from qualifying purchases.

When you’re dealing with the complexities of a sexually magnetic sign like Aries, it can be really difficult to tell if he loves you or not.

With his confident and direct demeanor, he might seem like the kind of guy who simply doesn’t beat around the bush and just comes right out and says when he’s into someone, but that’s not totally true.

Not only do Aries men play hard to get for fun, they also keep their heart guarded. Their strong sense of independence translates into a natural instinct to hold back parts of themselves from others, including their emotions.

So how do you know for sure if an Aries is head-over-heels about you?

If you want to know if an Aries man is in love with you, here are 10 signs that will help you understand his true feelings: 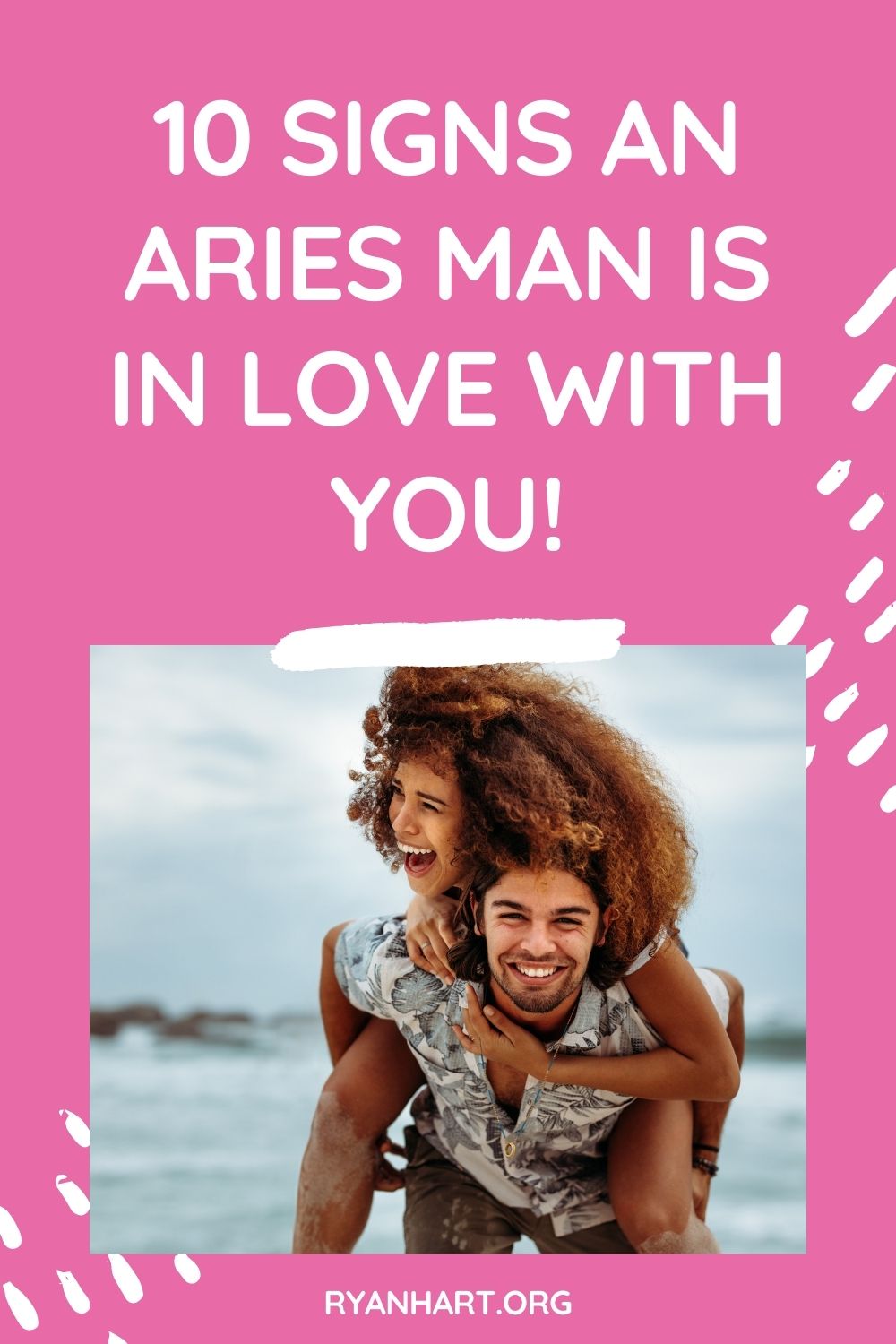 1. He takes time to listen and comfort you when you are upset

When your heart is heavy and you’re struggling to get out of bed, he takes the time to listen and comfort you. You tell him all about what’s happening at work or how a fight with your friend left you feeling torn apart.

He listens carefully, nods his head in understanding, then tells you that it’ll be okay. It doesn’t matter if it’s a text message, an email, or a phone call; just hearing his voice makes everything seem like things will be alright.

It’s not easy to listen to others when they’re feeling upset. But he doesn’t shy away from the task at hand - he embraces it. He never makes you feel like you’re being a burden or that he has better things to do.

2. He makes plans with you in advance

He’s always asking you to hang out. He’ll make plans with you weeks in advance, even if it’s just for a few hours.

It’s always so wonderful getting together with an Aries man. You pick a time and place to meet up beforehand, and he’ll be there waiting for you when you arrive.

He’ll make sure that the food is good, the music is playing, and all of the other plans are set in advance.

3. He is protective of your feelings

He is protective of your feelings and doesn’t like anyone making fun of you or hurting your ego. He’s always down to make a joke, but he never makes jokes at your expense.

When you’re with him you never worry about being the butt of his jokes. He’s always so sure to make everyone laugh - it just comes naturally to him!

If someone hurts your feelings, he’ll comfort and reassure you until everything feels better again

4. When he finds a good gift for you, he buys it without being asked

When he sees something that would make a good gift for you, he buys it without being asked. Aries can be a real sweetheart if they choose to be. They are very generous and will do anything for their loved ones.

They will never ask for anything in return and hold their tongue if they feel like they aren’t being appreciated. They will be the first to offer their help and support if there is a need for it. They enjoy being pampered and lavished with love, but they don’t feel the need to ask for it.

5. You can always count on him to be there for you

You can always count on him to be there when you need a helping hand. You know he’ll do anything he can for you, because that’s just how they are.

And it doesn’t matter what the emergency is - he’ll be there with his arms wide open and ready to help any way that he can. You don’t even have to ask, because I’m sure he already knows what you need before you even say anything.

6. He wants to spend as much time with you as possible

He wants to spend as much time with you as possible, even if it means missing out on things with his friends. He doesn’t want to leave you and he’s willing to give up anything for another minute of your company.

He never wants to give up all the time he has with you for anything in the world. You’re so important to him and he thinks of you as a blessing everyday! You feel the same way so that makes this all worth it.

7. If he does something wrong, he apologizes right away

Aries men are not too proud to apologize if they do anything wrong. They will do so in a way that is sincere and shows how much they care, although sometimes it’s difficult for them to say sorry.

Aries men are the most confrontational and will apologize if they do anything wrong, even if it was a mistake. They’re very open to change and always want everyone around them to be happy.

The Aries man is always looking for an opportunity to be the hero. They want their fellow men and women to know that they are strong enough to handle anything life throws at them, but they also have a sensitive side.

Yes, this big guy may seem like he isn’t afraid of anything, but it’s important not to take advantage of that because when you do, he will feel so embarrassed and terrible about himself.

8. He gets jealous if another man gets too close to you

It’s easy to see why Aries personalities can be so jealous. They’re smart, creative, and incredibly ambitious – so it’s no wonder they want everything they come across.

They love to feel like they have the upper hand in the relationship and will do whatever it takes to maintain a sense of control.

Aries personalities will often get jealous because it gives them an excuse to be controlling and unreasonable. They want to feel like they can dictate the relationship by constantly checking in with their partner – so if their significant other doesn’t respond quickly enough, some Arians will assume the relationship is over.

9. He will touch your arm or hand when speaking to you

Aries men are known to be friendly and talkative. When they speak with you, they’ll often place a hand on your arm or hand for emphasis.

They’re so excited about what they have to say that it doesn’t matter how much space there is between the two of you; their kindhearted nature will still shine through in everything they do and say.

When you’re around, he’ll often touch your arm or hand during conversation and it just makes you feel so special. You really are one of the luckiest people in the world because this guy is crazy about you.

10. His eyes light up every time he sees you

His eyes light up every time he sees your face and his smile widens just for a second before returning back to normal. This is called “the Aries smile” because they only show their true feelings briefly before going back into hiding again. That split second is enough to make your heart soar. You’re not sure what it means, but you don’t care because he’s happy and so are you.

Are you in a relationship with an Aries man?

How does he act when he’s around you?