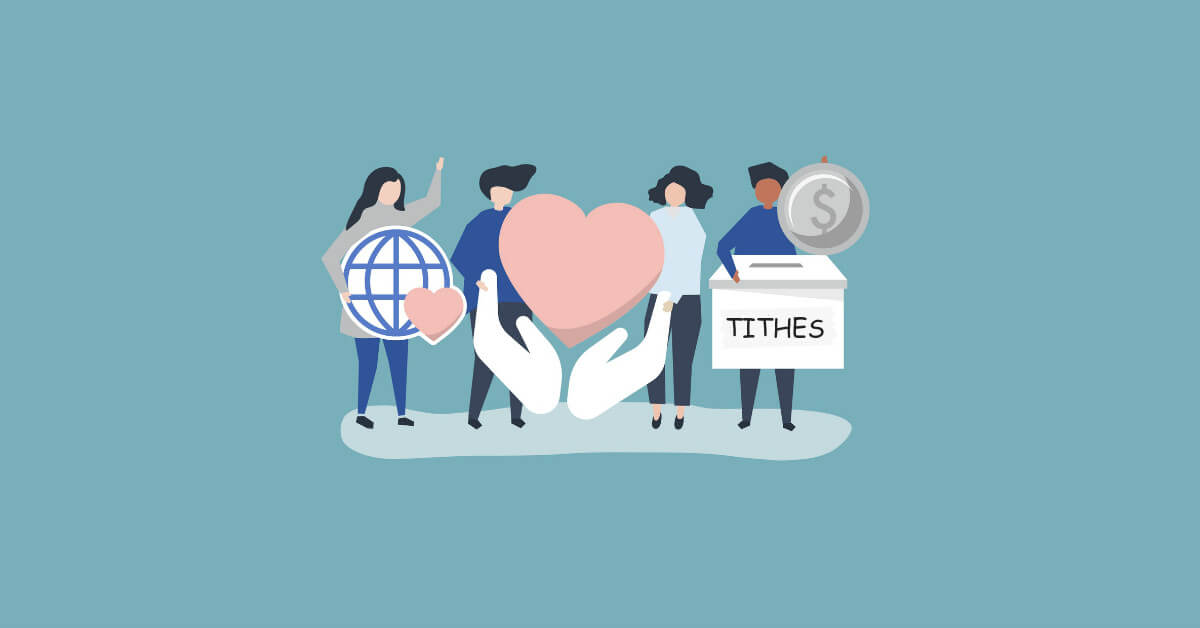 In this post I’m going to share with you my favorite bible verses about tithing and offerings from the Old and New Testament.

These are the same scriptures on tithing I read when I’m feeling grateful for God’s generosity and all the gifts He provides.

If you need some inspiration to start tithing (donating 10 percent of your income to the church), these bible verses are a great place to look for guidance. 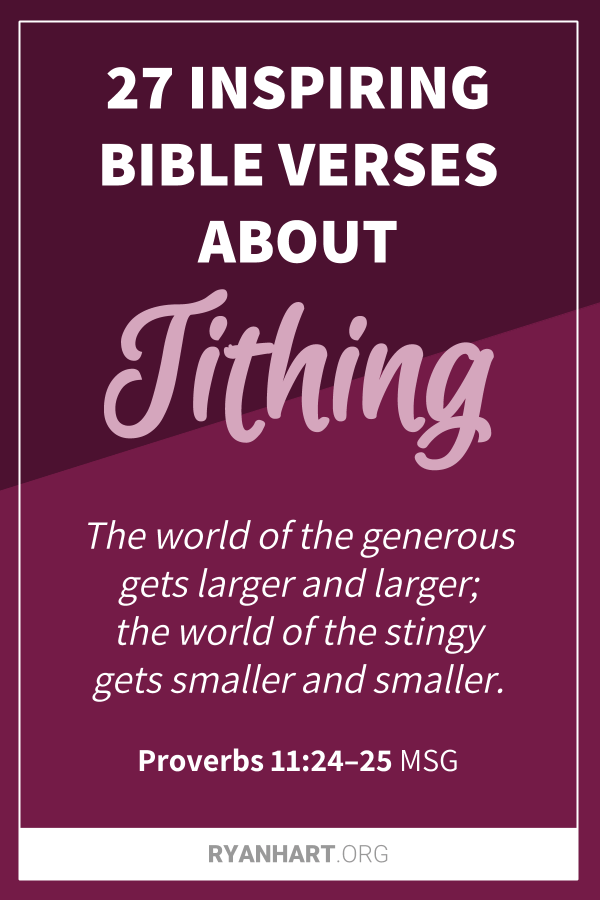 Bible Verses About Tithing in the Old Testament

And blessing him, said, May the blessing of the Most High God, maker of heaven and earth, be on Abram: And let the Most High God be praised, who has given into your hands those who were against you. Then Abram gave him a tenth of all the goods he had taken.

Then Jacob took an oath, and said, If God will be with me, and keep me safe on my journey, and give me food and clothing to put on, So that I come again to my father's house in peace, then I will take the Lord to be my God, And this stone which I have put up for a pillar will be God's house: and of all you give me, I will give a tenth part to you.

They came, men and women, all who were ready to give, and gave pins and nose-rings and finger-rings and neck-ornaments, all of gold; everyone gave an offering of gold to the Lord.

And every tenth part of the land, of the seed planted, or of the fruit of trees, is holy to the Lord. And if a man has a desire to get back any of the tenth part which he has given, let him give a fifth more. And a tenth part of the herd and of the flock, whatever goes under the rod of the valuer, will be holy to the Lord. He may not make search to see if it is good or bad, or make any changes in it; and if he makes exchange of it for another, the two will be holy; he will not get them back again. These are the orders which the Lord gave to Moses for the children of Israel in Mount Sinai.

And to the children of Levi I have given as their heritage all the tenths offered in Israel, as payment for the work they do, the work of the Tent of meeting.

Say to the Levites, When you take from the children of Israel the tenth which I have given to you from them as your heritage, a tenth part of that tenth is to be offered as an offering lifted up before the Lord.

But let your hearts be turned to the place which will be marked out by the Lord your God, among your tribes, to put his name there; And there you are to take your burned offerings and other offerings, and the tenth part of your goods, and the offerings to be lifted up to the Lord, and the offerings of your oaths, and those which you give freely from the impulse of your hearts, and the first births among your herds and your flocks;

Put on one side a tenth of all the increase of your seed, produced year by year.

At the end of every three years take a tenth part of all your increase for that year, and put it in store inside your walls: And the Levite, because he has no part or heritage in the land, and the man from a strange country, and the child who has no father, and the widow, who are living among you, will come and take food and have enough; and so the blessing of the Lord your God will be on you in everything you do.

In addition, he gave orders to the people of Jerusalem to give to the priests and Levites that part which was theirs by right, so that they might be strong in keeping the law of the Lord. And when the order was made public, straight away the children of Israel gave, in great amounts, the first-fruits of their grain and wine and oil and honey, and of the produce of their fields; and they took in a tenth part of everything, a great store.

Give honour to the Lord with your wealth, and with the first-fruits of all your increase: So your store-houses will be full of grain, and your vessels overflowing with new wine.

A man may give freely, and still his wealth will be increased; and another may keep back more than is right, but only comes to be in need.

Come to Beth-el and do evil; to Gilgal, increasing the number of your sins; come with your offerings every morning and your tenths every three days: Let that which is leavened be burned as a praise-offering, let the news of your free offerings be given out publicly; for this is pleasing to you, O children of Israel, says the Lord.

Bible Verses About Tithing in the New Testament

Take care not to do your good works before men, to be seen by them; or you will have no reward from your Father in heaven. When then you give money to the poor, do not make a noise about it, as the false-hearted men do in the Synagogues and in the streets, so that they may have glory from men. Truly, I say to you, They have their reward. But when you give money, let not your left hand see what your right hand does: So that your giving may be in secret; and your Father, who sees in secret, will give you your reward.

A curse is on you, scribes and Pharisees, false ones! for you make men give a tenth of all sorts of sweet-smelling plants, but you give no thought to the more important things of the law, righteousness, and mercy, and faith; but it is right for you to do these, and not to let the others be undone.

And he took a seat by the place where the money was kept, and saw how the people put money into the boxes: and a number who had wealth put in much. And there came a poor widow, and she put in two little bits of money, which make a farthing. And he made his disciples come to him, and said to them, Truly I say to you, This poor widow has put in more than all those who are putting money into the box: Because they all put in something out of what they had no need for; but she out of her need put in all she had, even all her living.

But a curse is on you, Pharisees! for you make men give a tenth of every sort of plant, and give no thought to right and the love of God; but it is right for you to do these things, and not let the others be undone.

And he made this story for some people who were certain that they were good, and had a low opinion of others: Two men went up to the Temple for prayer; one a Pharisee, and the other a tax-farmer. The Pharisee, taking up his position, said to himself these words: God, I give you praise because I am not like other men, who take more than their right, who are evil-doers, who are untrue to their wives, or even like this tax-farmer. Twice in the week I go without food; I give a tenth of all I have. The tax-farmer, on the other hand, keeping far away, and not lifting up even his eyes to heaven, made signs of grief and said, God, have mercy on me, a sinner. I say to you, This man went back to his house with God's approval, and not the other: for everyone who makes himself high will be made low and whoever makes himself low will be made high.

On the first day of the week, let every one of you put by him in store, in measure as he has done well in business, so that it may not be necessary to get money together when I come.

How while they were undergoing every sort of trouble, and were in the greatest need, they took all the greater joy in being able to give freely to the needs of others. For I give them witness, that as they were able, and even more than they were able, they gave from the impulse of their hearts

But true faith, with peace of mind, is of great profit: For we came into the world with nothing, and we are not able to take anything out; But if we have food and a roof over us, let that be enough.

For this Melchizedek, the king of Salem, a priest of the Most High God, who gave Abraham his blessing, meeting him when he came back after putting the kings to death, And to whom Abraham gave a tenth part of everything which he had, being first named King of righteousness, and then in addition, King of Salem, that is to say, King of peace;

Which of these bible verses about tithing is your favorite?

Do you think all Christians should be required to tithe?

p.s. Have you ever wondered what the future holds for your love life?

Get answers from an expert psychic today! Click here to get started for free

Ryan Hart is a lifestyle blogger and author of Supernatural Happiness. Connect with Ryan by subscribing to his weekly newsletter.