In this post I’m going to share with you the Memorare Prayer to the Blessed Virgin Mary.

The Memorare is one of the most popular Marian prayers and has been proven to work miracles over the last 500 years.

Ready to learn the Memorare prayer?

Remember, O most gracious Virgin Mary, that never was it known that anyone who fled to your protection, implored your help, or sought your intercession, was left unaided. Inspired by this confidence, I fly unto you, O Virgin of virgins, my Mother. To you do I come, before you I stand, sinful and sorrowful. O Mother of the Word Incarnate, despise not my petitions, but in your mercy, hear and answer me. Amen.

Through prayer we can honor the Virgin Mary, however we do not worship her. The Memorare is a simple prayer asking for her intercession or help in addition to the guidance we receive from God.

The original prayer was written in Latin and gets its name from the first word of the prayer, memorare, meaning “remember.”

The Memorare prayer we know today was taken from a longer piece of text titled “Ad sanctitatis tuae pedes, dulcissima Virgo Maria” which translates to “To them at your feet, sweet Virgin Mary.” The text was published in the 15th century.

Father Claude Bernard (1588-1641) popularized the Memorare prayer after it miraculously cured a deathly illness he was suffering from. He proceeded to share the Memorare with others and had over 200,000 leaflets printed with the prayer in various languages.

Mother Teresa of Calcutta (1910-1997) was also known to pray the Memorare often and it has been said that it was one of her favorite prayers. In fact, she would recite the prayer nine or ten times in a row when she needed a miracle, which became known as an express or quick novena. 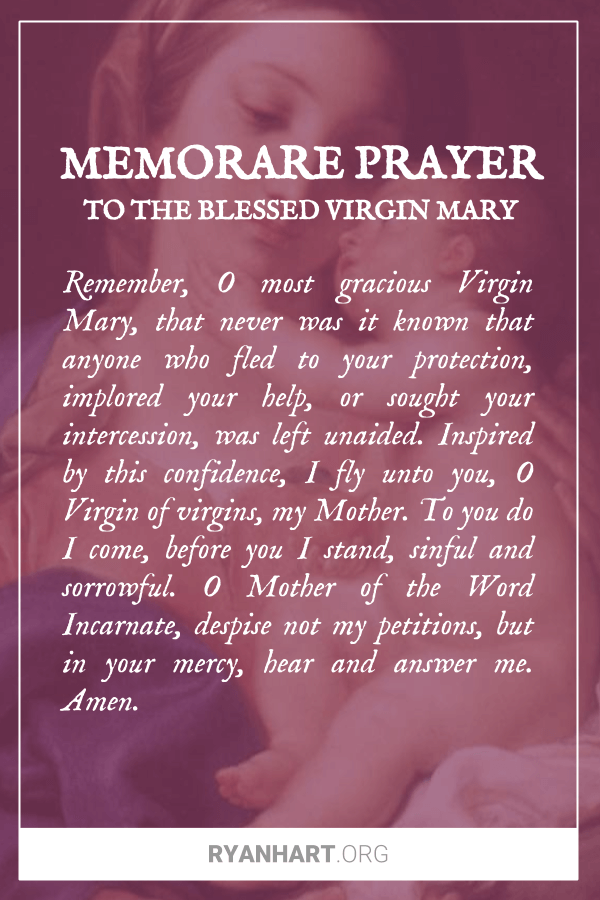 What does the Memorare prayer mean to you?

Have you experienced any miracles after praying to the Blessed Virgin Mary?

Spiritual Meaning of Angel Number 1111
Why You Dream About Someone
[Comments are closed]
Comments:
Ryan Hart
May I pray for you? Please leave a comment and share your prayer request.
Amanda
Please pray for my grandfather, Francisco, who’s currently in the hospital right now on a ventilator with a rare disease
Vijayalakshmi
This is my first memorare prayer request.I am very badly in need of financial breakthrough for my daughter's first baby shower.on 16th aug 2020.we are selling our luggage vehicle.but the person who needs it did not turn up to buy.may the memorare help me with finance. Tk u amen
John Johannsen re
I am praying this Memorare Prayer for Maria Cardullo who is having two medical app's next Tuesday.
Stacey
I am praying for my mom who has a rare cancer (gallbladder cancer) that has a poor prognosis. She is about to start chemotherapy but it still doesn't have a good outlook. I am praying for a miracle that the cancer cells are removed from her body. I am praying so hard!
Anna Mcclendon
I need prayers for financial help. My husband died no will. I'm paying the house note and the house will never ever be mine. Belongs to his son but he's forcing me to pay the note because I'm living in the house. I have run out of money. Can someone help me?