by Ryan Hart | Updated on June 15, 2021 | Post may contain affiliate links. As an Amazon Associate we earn from qualifying purchases.

The Scorpio Sun Pisces Moon is a combination of zest and compassion. Free-spirited and soulful, those born with this Sun/Moon combination are artistically gifted yet they desire constant self-improvement. They have genuine empathy for the human condition; they attract a wide range of friends and admirers.

Humor, intuition and natural compassion are the hallmarks of the Scorpio/Pisces combination. It’s impossible to say which represents the more compassionate person, as they are both strong feeling signs. 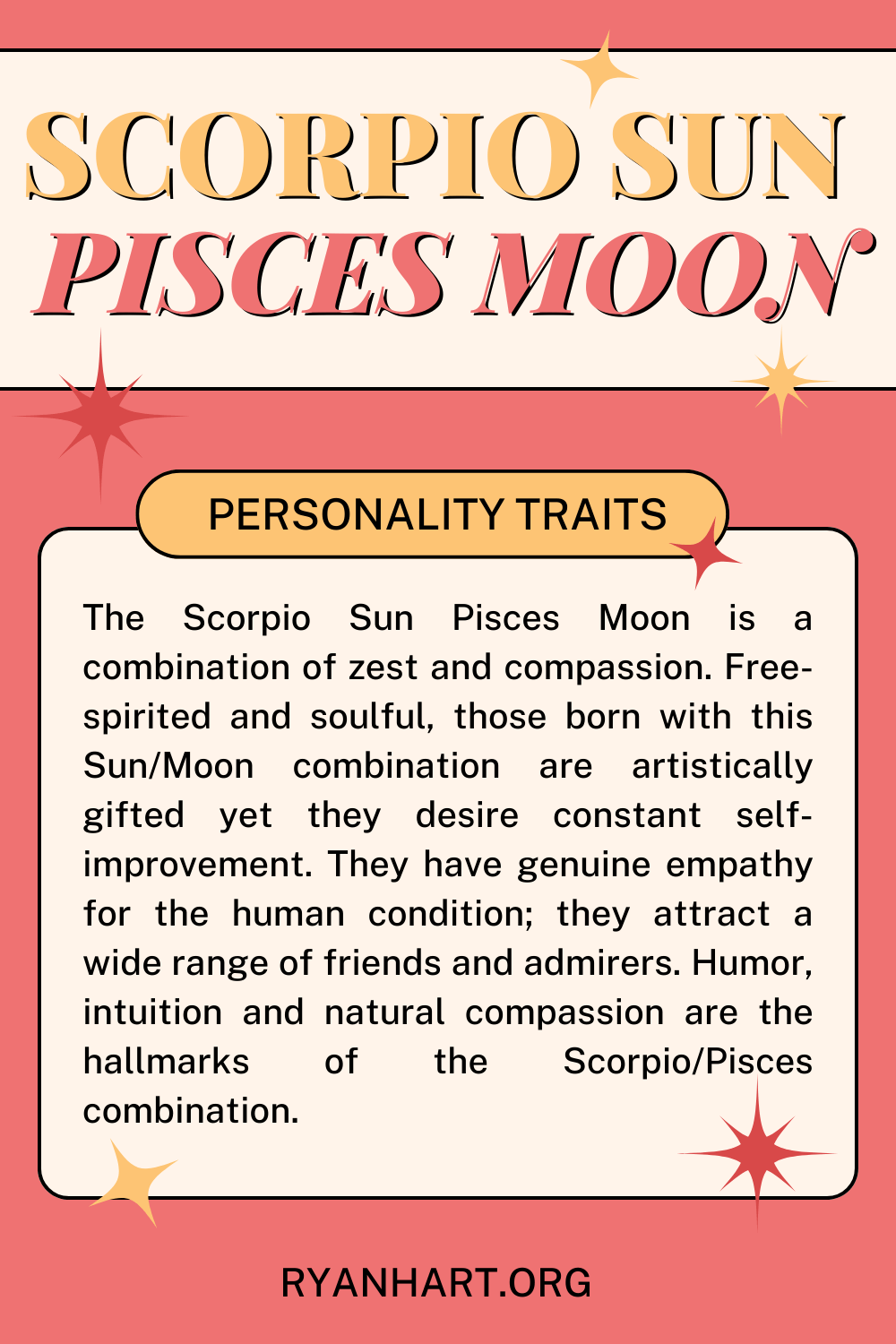 They can be mysterious and often has an intense attraction that, once ignited, is difficult to put out. Rarely influenced by others, Scorpios tend to make their own decisions based on emotional impulses and gut reactions rather than logic.

The Moon in Pisces placement describes people who are empathetic, empathetic, compassionate, kind-hearted and soulful. They are very creative, spiritual and open to the unseen world.

For those born with the Moon in Pisces, dreams become reality through the use of intuition and charm. Because of their vivid imaginations they have problems separating reality from fantasy. This can be a good or bad trait depending on how the individual uses it.

They are too sensitive for this world and often get hurt because of too much emotional depth. Pisceans tend to absorb other’s pain or negative vibes.

Pisces Moon people are empathetic, kind, gentle-hearted, romantic, and spiritual, but also weak and indecisive. They can be insecure and needy, making them a little too dependent on others. Pisces Moon people tend to have one or several big life dreams that they try to fulfill in adulthood.

They are ambitious and have a talent for making money. They crave security in every area of their lives. They have an intense love for family and can be very generous to their relatives, but they also assume great responsibility for them.

Some key characteristics of people born under this astrological sign are: they have high self-esteem, are willing to go against the mainstream, and ready to challenge the status quo; they are emotional, but keep their feelings hidden until something bad happens; they are resilient, strong willed, and act before thinking.

The Scorpio Sun Pisces Moon woman is loyal, affectionate and sincere in every way. She’s always looking to find new and interesting people to meet and learn from so she can grow as a person.

These women are protective, loyal, and always want to make sure that everyone feels safe and loved. They often give too much of themselves to others, especially as children, when they eagerly began taking care of their parents and siblings (if any). They are very spiritual and believe in God, universal love, angels, etc.

A Scorpio Sun, Pisces Moon woman is usually extremely sensitive about her family, and may suffer from jealousy, even if she is not aware of it. She could have an urge to dominate and control those around her. A Scorpio will demand access to your thoughts and feelings, and can be masterful at manipulating your emotions.

Scorpio women are intuitive and strong. They accurately assess danger or risk, which is often identified in some negative way. They may convince themselves they are the victim or deserving of a negative trait or experience, such as rejection from a romantic partner.

They can lose their desirable traits through faulty perception and exaggeration of events, which is commonly called self-pity. The most desirable quality of the Scorpio sun sign woman is her freedom in personal relationships, including intimacy. She will not give up her emotions easily unless she feels trapped by another person’s needs and will be unrelenting in her pursuit of happiness.

The trademark Scorpio’s self-confidence is supported by an all-or-nothing attitude and a definite belief in their own perceptions. No matter how others' viewpoints contradict their own, they will follow their own instincts. Scorpios like to do things on their own terms.

They are demanding of others, often manipulating them into doing what they want. When it comes to partnerships, compatibility can be a problem between the Scorpio and others because egos are frequently involved.

This Sun-Moon combination is inclined to mysticism, which gives you a great imagination and strong creativity. However, the danger of this is that you could spend too much time dreaming about what might be rather than concentrating on fulfilling your ambitions.

The Scorpio Sun Pisces Moon woman is loyal, passionate, and a little rebellious. This personality has amazing intuition that allows her to make the right decisions without hesitation.

She is charismatic, charming, and deeply mysterious. She has strong intuition and a deep emotional sensitivity that she is able to hide from the world.

She is an intense person who demands an unusual degree of privacy, even for a Pisces. If you break through her self-imposed barriers, you’re in for an intriguing adventure with a woman whose calm exterior belies a deep passion for life.

The Scorpio Sun Pisces Moon woman is very creative, intuitive, and aware of the natural world. She may become a painter, fine-artist, interior decorator, or landscape designer.

She is drawn to spirituality and mysticism and will likely delve into several New Age or Eastern practices throughout her lifetime. The Scorpio Sun Pisces Moon woman is an excellent listener who offers sound advice when it’s least expected.

A Scorpio Sun Pisces Moon man is someone special. He can be powerful and successful but quite intense and sensitive. He may have trouble defining his feelings, being in touch with them, or showing them.

Scorpio Sun Pisces Moon people are deep thinkers. They have great compassion, and use their imagination to create a beautiful world in their mind.

Many would describe them as eccentric. They’re often overly ambitious, very passionate, and can be attracted to things that are mystical or mysterious.

He has an eye for beauty only matched by his love of the opposite sex which in most cases has an emotional side to it, at least on his part. Whether it is an obsession or something less profound, this guy needs attention and affection from those around him.

The Scorpio man is quite complex and mysterious, but his friends will tell you that he’s a loyal friend who has a protective side. He holds strong beliefs, but also values family and friendship. This man will do anything for his friends and family and always be there when they need him.

The Scorpio Sun Pisces Moon man is someone who is a self-sacrificing individual. He gives everything he’s got to others willingly and expects nothing in return.

He enjoys giving and this makes him feel good about himself. He will always be there to offer a helping hand, but does expect people to take advantage of his giving nature, so he tries to show appreciation when they do.

For the Scorpio Sun/Pisces Moon man, physical touch can be a bit shocking because they aren’t used to feeling vulnerable in this way. They feel things deeply and compassionately and may need to take a step back at times to make sure that others aren’t getting hurt.

You have a highly emotional, imaginative and compassionate nature. Delightful conversation is one of your outstanding qualities, and you enjoy the company of others.

They pride themselves on being helpful and loyal, but love to stand out or be admired. Thus, they are likely to be a little vain about their appearance. This element of vanity may be the greatest weakness of this type.

If you want their help, you need to ask for it subtly, and even then they will assume that you’re asking them for help because they’re naturally gifted with things like fixing computers and cars.

The Scorpio man is a combination of independent strength, sensitivity and mystery. He is keenly observant of others and a powerful force to be reckoned with. He is the most magnetic of all the male signs.

Are you a Scorpio Sun Pisces Moon?

What does this placement say about your personality and emotional side?

Please leave a comment below and let me know.