by Ryan Hart | Updated on February 9, 2021 | Post may contain affiliate links. As an Amazon Associate we earn from qualifying purchases.

Aries Zodiac natives are said to be decisive, energetic, blunt, and ambitious. They have a need to be in charge of their environment and are very courageous, fearless and independent-minded. 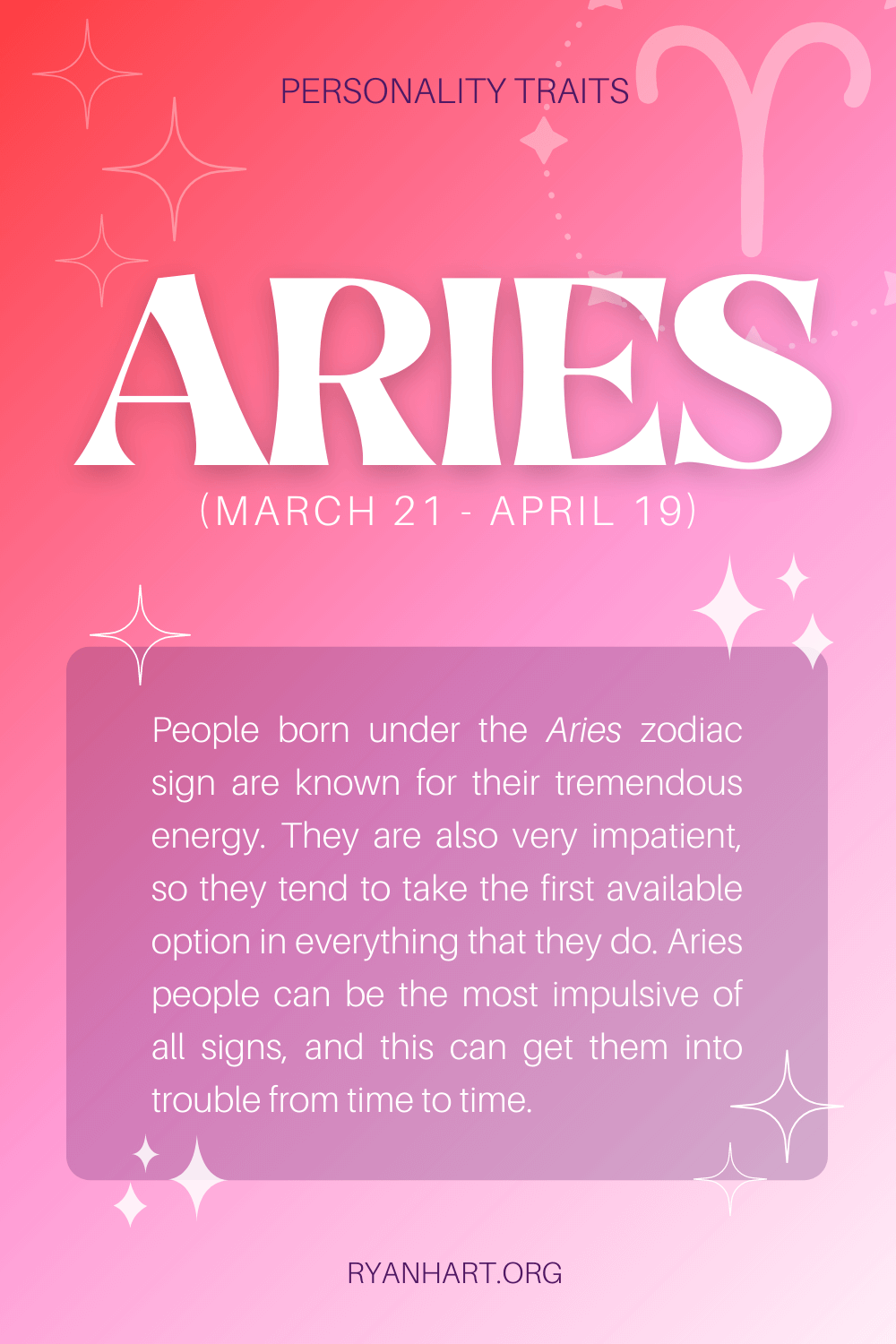 People born under the Aries zodiac sign (March 21 - April 19) are known for their tremendous energy. They are also very impatient, so they tend to take the first available option in everything that they do.

Aries people can be the most impulsive of all signs, and this can get them into trouble from time to time.

They tend to have a lot of willpower, which allows them to push themselves and others for as long as they can handle it. As a result, they often have a lot of success in life.

A person born under this sign is always looking for opportunities to prove himself or herself, and he or she will often start many projects at once.

They are known for being opportunists and great risk takers, which helps them accomplish their goals. They are also very competitive and want to be the best at everything that they do.

Aries personalities are drawn to leadership positions or jobs where they can develop their talents.

Aries people are ambitious and may have trouble with intimacy because of it. This is because they tend to focus more on achievement than relationships.

If a relationship is causing them to feel like they aren’t moving forward or achieving, then they may leave the relationship behind.

Their ambition may also cause them to be workaholics, which will lead to conflict with others in the workplace or home life.

They have strong opinions that most people don’t share, so this can cause some rifts in their relationships as well. They do love other types of people though; it’s just harder for them to stay in a relationship where things aren’t moving forward.

Aries is a fire symbol, so Arian people tend to be very active, energetic, fiery and passionate people who put their heart and soul into everything they do. When they get bored they move on to something else because they are natural born adventurers.

They like to be involved in as many activities as possible and hate missing out on anything new or exciting that’s going on around them.

They are very independent people who love freedom and being able to do whatever they want, when they want, without paying attention to what anybody thinks.

They are true free spirits with an incredible gift for adventure! Their passion for life burns hot with enthusiasm for anything new. In fact, if you can’t keep up with their energy level you will soon lose them as friends because Aries is always looking for somebody new to talk with.

They like always trying something new to do rather than hang around boring people or places that don’t stimulate their imagination at all! They love being the center of attention at all times and thrive on compliments while never taking criticism well at all!

When it comes down to it though, Aries is actually a very insecure person who hides behind an aggressive nature that makes them come off as being much more confident than they really are.

Aries are the daring, self-assured ones. They’re seekers and dreamers, who often have to balance their innate direction know-how with the reality of external structures they need to keep themselves on track.

Aries “are always in motion,” as one writer described them - and that’s especially true when it comes to romance: these days is all about possibilities! They’re always on the lookout for new love, and they’re very good at keeping a relationship fresh and exciting.

Lucky for Aries, it’s easy to find love in the springtime: They’re more attractive than usual because their good spirits are so apparent. This is a time of year when relationships can blossom easily.

The real challenge for an Aries is keeping things hot in the long term. Because they’re used to having disposable romances, they may have trouble maintaining a long-term partnership or marriage.

What is an Aries?

Aries is the first house in the zodiacal wheel and represents our personal identity, ego, and personality.

The word “Aries” comes from the Latin word meaning “ram.” Aries represents the mythological Ram that rescued Phrixos and Helle.

There are several different versions of this story. In one version, they were abandoned in a basket which was set adrift on the River Euphrates. The river carried them to the land of Colchis where the King Aeetes took them in and raised them as his own children.

Phrixos grew up to be a great herdsman and Helle became quite famous for her beauty. Both Phrixos and Helle asked their stepfather Aeetes for permission to marry, but he refused, saying that he would only consent if each brought him something of exceptional beauty.

Phrixos went before the sun-god Apollo who advised him to ask Aeetes for a special golden sheep-skin (Caucasian goat).

He was then told to take it back with him to Greece and hang it in front of a temple at daybreak, where it would be turned into an actual golden fleece by the rays of sunrise. Phrixos could then pick up this golden fleece and claim his bride, but there was a catch - if he let go of it during its transformation, it would disappear forever.

Phrixos set out on his journey with his sister Helle on board a ship loaded with treasures collected by Aeetes from all over the world. Unfortunately she fell overboard when they hit rocks off shore near Greece and drowned in what is now called Hellespont - named after her; hence we have the expression “Hell hath no fury like a woman scorned”. Phrixos however was able to retrieve the golden fleece and return safely to Greece.

On his journey home, Phrixos encountered Aeetes' brother, the god of war Mars, who turned him into a ram for revenge for being robbed of his lover, Rhea Silvia (also known as Ilia).

The goddess Venus took pity on the poor boy and turned him back into human form before he was sacrificed by Aeetes. She then sent him on his way with a chest of gold and silver (the Golden Fleece) and advice about how to get back to Greece safely.

But when he returned home, his stepmother Jocasta arranged for another set of suitors to kill him in their attempt to claim both the treasure and her hand in marriage.

Are you an Aries?

Does your zodiac sun sign accurately describe your personality?