by Ryan Hart | Updated on June 1, 2021 | Post may contain affiliate links. As an Amazon Associate we earn from qualifying purchases.

The Aries Sun Pisces Moon personality is a combination of the fire of Aries, with the water of Pisces, and the mysticism of Neptune, giving you an active mind, sometimes prone to meandering. You have a good eye for the big picture and often yearn for a life of travel or spiritual pursuits.

Aries Sun Pisces Moon individuals have a unique blend of misunderstood strengths and weaknesses. Their most distinctive feature is the fantastic inventor, who combines fertile imagination with a talent for bringing big ideas into reality.

They are uncommonly sensitive with a deep concern for others. They take the happenings in life too much to heart and feel everything very profoundly.

Inquisitive, yet doubtful, they often wonder about their place in life and where they fit in. Their faith is strong but hard-won due to seeing the darker side of life at a tender age.

The Aries Sun Pisces Moon is a special kind of soul. They are lighthearted and enthusiastic people who find pleasure in being around other people.

They love the novelties of life, and have an incomparable ability to find the silver lining in every situation. With such a sunny disposition, they can be rather difficult to get upset with anything.

Their self-preservation mechanism is pretty well-honed, and they know how to defer disaster with a humble, laid-back attitude that everything will work out in the end. They are bright, enthusiastic, compassionate, and kind-hearted people. They are creative and speak the language of the heart.

The immense charm and charisma of an aspiring Aries can have people falling for this true enthusiast. However, Aries Sun Pisces Moon is more connected to the serene side of life and can feel a bit lost and lonely when alone.

They live life in the fast lane, as an explorer who likes to discover new things, likes to live on the edge, is brave, athletic, strong-willed and adventurous.

Aries Sun Pisces Moon individuals are known for their imagination and their beautiful artistic minds. They are a hopelessly romantic soul who obsesses for a long time about the first love experience, and they can be found yearning for the memories of their first teenage crush.

They express themselves in a highly artistic manner, and they have an idealized view of life. This sign is strong on intuition; they ‘just know’ when a person is not to be trusted, and often it is via a sixth sense or gut feeling that alerts them to danger.

They are a person who puts a great deal of emphasis on his or her friends and family, and resist loneliness as though it were their sworn enemy. They will do anything in their power to never be alone because of the associations that loneliness brings to them. 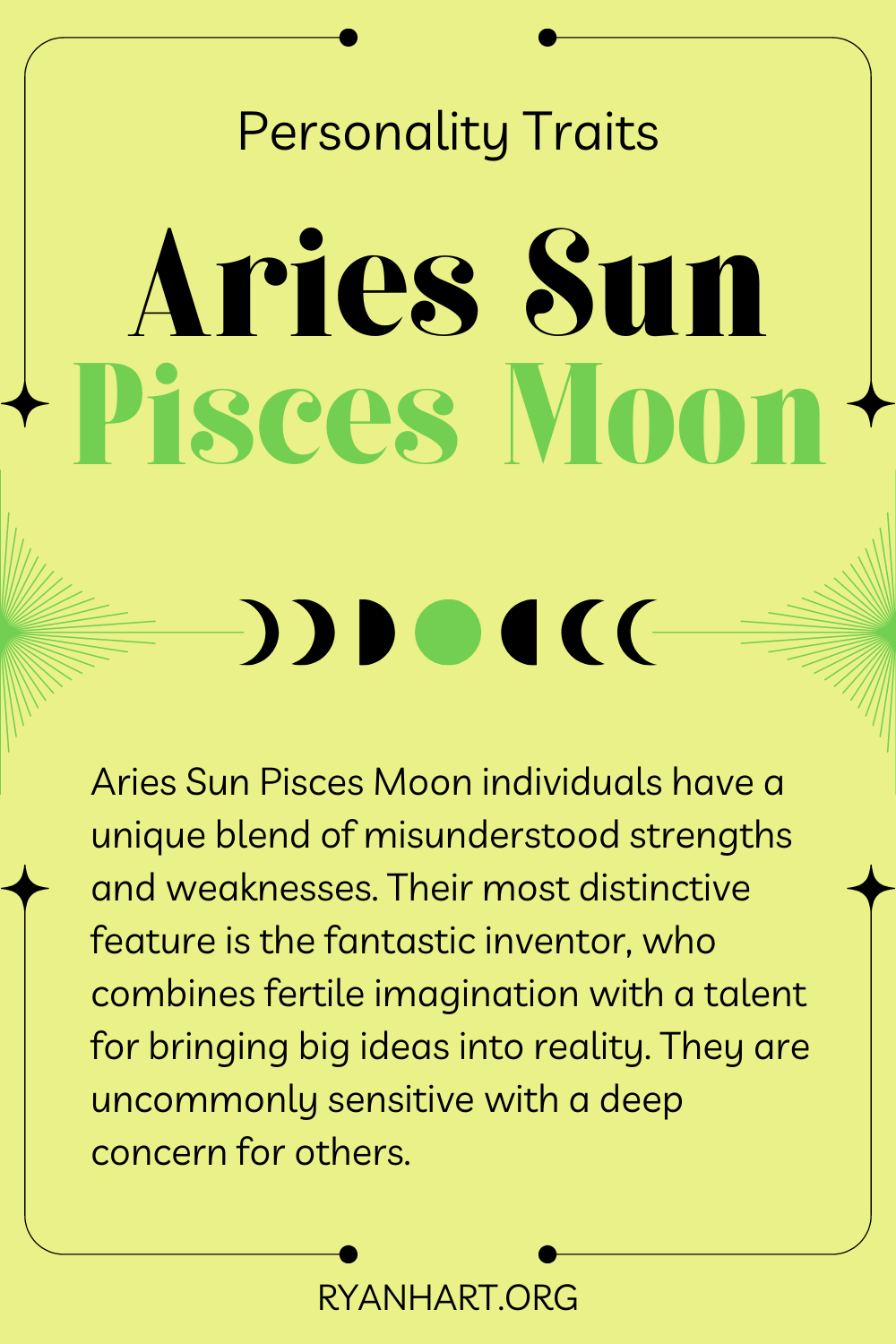 Her great passion in life is to love and be loved. This Aries Sun Pisces Moon woman personality is not all about love though; she also craves power and straightforwardness in her partners.

The Sun in Aries Moon in Pisces woman is prone to be romantic and spontaneous. She does not like to be tied down in a relationship, hence may appear fickle, but she actually just looks for something better over time.

Although, the combination of her signs may make her seem somewhat enigmatic and difficult to pin down. The Aries Sun Pisces Moon woman has a flair for the creative, music, writing, art and fashion.

She is the most diplomatic of all the Sun-Moon signs. This gentle, romantic, and artistic woman eschews conflict and violence.

They often don’t want to make decisions for fear that they may hurt someone’s feelings. She likes to retreat into her own world where she can immerse herself in art or nature.

The Aries Sun Pisces Moon woman posses an enticing combination of charming and eccentric traits that make her just as unpredictable as she is charming. Not at all shy, she has the ability to win over everyone she meets, including the most reticent of souls.

She is passionate, self-centered, yet charming and well liked. This Aries woman has a great sense of humor and is known for her quick wit. But unlike other Aries sun sign traits, Pisces Moon people tend to be shy, introverted, and more prone to anxiety than confidence.

They are sweet and charming with a sensitive nature, but will stand up for what they believe in when pushed. They can easily relate to other people’s feelings and emotions and are good at giving advice.

They can sometimes come across as bossy and arrogant, but they want what is best for everyone involved. The Aries Sun Pisces Moon woman can be difficult to read, as she can come off as being quite different from one situation to the next.

More than any other Sun sign, she’s the queen of reinvention. The relationship between her Sun and Moon signs is a key to understanding what her true personality is.

The Aries Sun Pisces Moon woman is creative in her aspirations and can achieve a great deal if she remains connected to her spiritual side. Though she possesses a fiery temper and strong will, it is possible for her to soften her approach with age.

They are great at creating communities, and helping to integrate those who are going through a lot of change. They tend to take time to get to know someone, and have a vested interest in people’s personal development and growth. They love the big picture, but they also love having lots of friends.

The Aries Sun Pisces Moon man is very sensitive to the moods of others. He appreciates the details and abilities of others that may often go unnoticed by friend and foe alike.

He is usually a deep thinker with a good head for studying, meditating, and analyzing his feelings. This man has little tolerance for shallow thinkers and ignoramuses.

The Aries Sun Pisces Moon man is an eternal romantic. He’s a highly sensual person who’s usually found with a lover, or several. This guy knows what he wants, and he’s also comfortable with who he is and what his role in the universe is.

You’ll never find him doubting himself; he’s a wise and confident soul with the kind of personality that makes everyone around him feel good. He doesn’t let drama get to him, but stays upbeat through it all, focused only on positive things.

The Aries Sun Pisces Moon man has a radiant, cheerful and sweet personality. He is independent, self-assured, a brave and passionate person who goes by his instincts.

There are times when you need to show your fiery side to lead the right path with courage and self-control. You may intimidate others at times. However, you can very easily forgive once you have made up your mind about something or someone.

The Aries Sun Pisces Moon man is motivated, adventurous and self assurance. He likes to be provided for, but he wouldn’t dream of being a kept man. He has no “off” switch and needs to burn off extra energy whenever possible.

He is a man who is compassionate, feelings-oriented, and has a tendency to take on responsibilities that are easily more than he may be able to handle. He is competitive in nature and wants to make money.

He doesn’t give up easily. This guy will put pressure on himself or others (or he attracts others who do) to push forward until he proves that he can do something or gets the results he desires.

In a relationship, Aries Sun Pisces Moon man is a gentleman who is sensitive and protective. He appreciates the fact that his partner has their own independent life with friends.

When you’re an Aries Sun Pisces Moon man, you have lots of potential and natural gifts that can make you one of the most successful people on the planet. You might not seem like it now, but you’re actually a rather ‘explosive’ person that attracts fast results and profits.

The Aries Sun Pisces Moon man is probably one of the most misunderstood men in society. He has his own personal beliefs and he does not like to be told what to do.

He is a real free spirit that tends to stir up trouble wherever he goes. He likes to know what is going on in society and will do everything in his power, except hurt others, to help those who are less fortunate.

Are you an Aries Sun Pisces Moon?

What does this placement say about your personality and emotional side?

Please leave a comment below and let me know.